Smile! You’re at the best WordPress.com site ever

Guilty of impersonating a family name?  “If you’re gonna name the baby  Leonard,  name him “Leonard.” , he says.

Is Leo “short” for Leonard,  or is Leonard for “long” for Leo.   Update. The dispute was resolved by grandpa Charles who now asserts that  Leonard can be “long’ for Leo, rather  than “short” for Leonard.  But his name is still is Leo? —Michelle MacDonald

J P Ghetty once said:  “I will give my entire fortune for ONE happy marriage”.  Michelle MacDonald’s client’s  often tell her say they will never get married again, to which she replies  “This is your last divorce, not your last marriage.”

“Someday, in the not so distant future,  children will look up at their elders and say ‘ You mean families used to be able to sue each other in court?’”

The Family Innocence Project promises to be a world-changing organization.  LISTEN NOW (or later) to the radio, and video clips below.  And this  Bird is just getting off the ground… www.FamilyInnocence.com.

LISTEN TO LINK ABOVE…Attorney Kimberly Hanlon, and mediator Anita Motolinia join attorney Michelle MacDonald, and her client, Benedictus Ombuna, whose tragic custody case inspired Family Innocence – the  organization.  Hear Benedictus’ heartbreaking story, from the perspective of  “family innocence”, starting with the death of his wife; the disappearance of his son at a routine bus stop; and the  wrongful ex parte (no notice) family court “custody order”. The case ended with the Judge removing himself, dismissing the relative’s custody orders,  and a finding of NO COURT JURISDICTION — back to “family Innocence.”  But the months of being separated from his son, and the costly, unneccessary litigation that his family could not afford, irreparably damaged the parent-child relationship.  Benedictus’ case  proved to be a world-changer for 25 year family law attorney Michelle MacDonald, to call attention to the concept of “family innocence”, and the simple fact that family matters are NOT court matters.

Breaking news: Family Innocence has an eye on a celebrity spokesperson…

Can you say “Baby Innocence 2013”?…Family Innocence has been making babies since… forever.  After Christian Marcus was born, January 31, 2011 (pictured on the way to grandma’s), we posted:

“By the time this baby can talk, with your help, the Family Innocence Project intends to eliminate the family court adversarial process in every case, in every state – one case at a time…”

“5.7 million domestic relations cases are decided each year in state courts*, dominated by divorce. Multiply that by dollars spent in attorney fees, multiple hearings, and number of family members effected in each case, and the numbers are astronomical. Add cases reopened to modify support, custody and visitation, and we have an epidemic on our hands”

Baby innocence is a baby born on the last day of January.  The plan is to support Baby Innocence’s family.  And the parents bring the adorable babies to Family Innocence events.

The Family Innocence Project Radio Show, aired again this morning, focusing on Restorative Justice Family Circles, an underground, elevated system of justice we can implement in families.  The shows are “evergreen” which means they can air at any time.

Last months show on the website using the analogy of the three little pigs that separate into 3 homes, with the third left standing. You should be able to listen by clicking below: 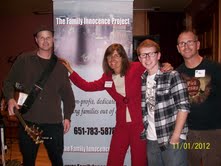 Musician Jeff James met up with attorney Michelle MacDonald, and Joshua and Ran Hare about being “instrumental” in  Family Innocence’s music division.

Joshua Hare’s family separated when he was five, but reunited at a recent family innocence project event.   Joshua, and his father, Randall Hare,  are self-taught musicians, and song writers.  They are shown here, playing together, and Joshua’s CD “Enjoy the Ride” were given to guests.    Some words to Enjoy the Ride, a  family innocence theme song by Joshua Hare, are below…

A new direction, its a new way of life
A new beginning, why not give it try.
This hopeful journey needs an open mind.
To discover the treasure inside.

You never know the world until you open your eyes
You never see the truth until you look past the lies
Mother nature is waiting for you to arrive
Step outside, Step outside
Enjoy the Ride.

Kids Of Divorce Finding Their Voice Through Music And Family Innocence

Joshua Hare and his dad, Randall  at  Family Innocence  Event